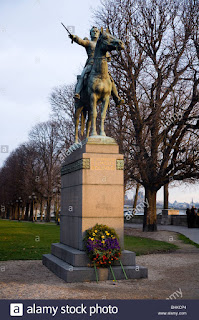 I know which country the US will invade next

This article was originally published by Truthdig.

The statements, views, and opinions expressed in this column are solely those of the author and do not necessarily represent those of RT.

We all want to know why America does what it does. And I don’t mean why Americans do what we do.

I think that question still will be pondered eons from now by a future professor showing his students a video mind-meld of present-day UFC fighters booting each other in the head while thrilled onlookers cheer (not for either of the fighters but rather for more booting in the head).

But we all seem to assume that America—the entity, the corporation—has some sort of larger reasoning behind the actions it takes, the actions put forward by the ruling elite. And almost all of us know that the reasons we´re given by the press secretaries and caricature-shaped heads on the nightly news are the ripest, most fetid grade of bullshit.

We now know that the invasion of Iraq had nothing to do with weapons of mass destruction.

We now know that the crushing of Libya had nothing to do with “stopping a bad man.” If one does even a cursory check of what dictators around the world are up to recently, you’ll find that the US doesn’t care in the slightest whether they are bad or good, whether they’re using their free time to kill thousands of innocent people or to harmonize their rock garden. In fact, the US gives military aid to 70 percent of the world’s dictators. (One would hope that’s only around the holidays though.)

So if it’s not for the stated reasons, why does the US. overrun, topple and sometimes occupy the countries it does? Obviously, there are oil resources or rare minerals to be had. But there’s something else that links almost all of our recent wars.

As The Guardian reported near the beginning of the Iraq War, “In October 2000, Iraq insisted on dumping the US dollar—the currency of the enemy—for the more multilateral euro.”

However, one example does not make a trend. If it did, I would be a world-renowned beer pong champion rather than touting a 1-27 record. (I certainly can’t go pro with those numbers.)

But there’s more. Soon after Libya began moving toward an African gold-based currency—and lining up all its African neighbors to join it—we invaded it as well, with the help of NATO.

Author Ellen Brown pointed this out at the time of the invasion:
[Moammar Gadhafi] initiated a movement to refuse the dollar and the euro, and called on Arab and African nations to use a new currency instead, the gold dinar.

John Perkins, an author of “Confessions of an Economic Hitman,” also has said that the true reason for the attack on Libya was Gadhafi’s move away from the dollar and the euro.

This week, The Intercept reported that the ousting of Gadhafi, which was in many ways led by President Nicolas Sarkozy of France, actually had to do with Sarkozy secretly receiving millions from Gadhafi, and it seemed that his corruption was about to be revealed.

But, the article also noted,“[Sarkozy’s] real military zeal and desire for regime change came only after [Hillary] Clinton and the Arab League broadcasted their desire to see [Gadhafi] go.” And the fact that Gadhafi was planning to upend the petrodollar in Africa certainly provides the motivation necessary. (It doesn’t take much to get the US excited about a new bombing campaign.

I’m pretty sure we invaded Madagascar once in the 1970s because they smoked our good weed.)

Right now you may be thinking, “But, Lee, your theory is ridiculous. If these invasions were about the banking, then the rebels in Libya—getting help from NATO and the United States—would have set up a new banking system after bringing down Gadhafi.”

Actually, they didn’t wait that long. In the middle of the brutal war, the Libyan rebels formed their own central bank.

Brown said, “Several writers have noted the odd fact that the Libyan rebels took time out from their rebellion in March to create their own central bank—this before they even had a government.”
Wow, that sure does sound like it’s all about the banking.

Many of you know about Gen. Wesley Clark’s famous quote about seven countries in five years. Clark is a four-star general, the former head of NATO Supreme Allied Command, and he ran for president in 2008 (clearly he’s an underachiever). But it’s quite possible that 100 years from now, the one thing he’ll be remembered for is the fact that he told us that the Pentagon said to him in 2002: “We’re going to take down seven countries in five years. We’re going to start with Iraq, then Syria, Lebanon, then Libya, Somalia, Sudan. We’re going to come back and get Iran in five years.”
Most of this has happened.

We have, of course, added some countries to the list, such as Yemen.

Apparently, our government/media care only about Syrian children (in order to justify regime change).

Brown goes even further in her analysis of Clark’s bombshell:

What do these seven countries have in common? … [N]one of them is listed among the 56 member banks of the Bank for International Settlements (BIS). That evidently puts them outside the long regulatory arm of the central bankers’ central bank in Switzerland. The most renegade of the lot could be Libya and Iraq, the two that have actually been attacked.

What I’m trying to say is: It’s all about the banking.

So right now you’re thinking, “But, Lee, then why is the US so eager to turn Syria into a failed state if Syria never dropped the dollar? Your whole stupid theory falls apart right there.”

First, I don’t appreciate your tone. Second, in February 2006, Syria dropped the dollar as its primary hard currency.

I think I’m noticing a trend. In fact, on Jan. 4, it was reported that Pakistan was ditching the dollar in its trade with China, and that same day, the US placed it on the watch list for religious freedom violations.
The same day? Are we really supposed to believe that it just so happened that Pakistan stopped using the dollar with China on the same day it started punching Christians in the nose for no good reason? No, clearly Pakistan had violated our religion of cold hard cash.

This leaves only one question: Who will be next on the list of US illegal invasions cloaked in bullshit justifications? Well, last week, Iran finally did it: It switched from the dollar to the euro. And sure enough, this week, the US military-industrial complex, the corporate media, and Israel all got together to claim that Iran is lying about its nuclear weapons development.

What are the odds that this news would break within days of Iran dropping the dollar?

The one nice thing about our corporate state’s manufacturing of consent is how predictable it is.

We will now see the mainstream media running an increasing number of reports pushing the idea that Iran is a sponsor of terrorism and is trying to develop nuclear weapons (which are WMDs, but for some strange reason, our media are shying away from saying, “They have WMDs”). Here’s a 2017 PBS article claiming that Iran is the top state sponsor of terrorism.

One must assume this list of terror sponsors does not include the country that made the arms that significantly enhanced Islamic State’s military capabilities.
(It’s the US)

Or the country that drops hundreds of bombs per day on the Middle East. (It’s the US) But those bombs don’t cause any terror. Those are the happy bombs, clearly. Apparently, we just drop 1995 Richard Simmons down on unsuspecting people.

Point is, as we watch our pathetic corporate media continue their manufacturing of consent for war with Iran, don’t fall for it. These wars are all about the banking. And millions of innocent people are killed in them. Millions more have their lives destroyed.

You and I are just pawns in this game, and the last thing the ruling elite want are pawns who question the official narrative.

Lee Camp is an American stand-up comedian, writer, actor, and activist. Dubbed by Salon as the “John Oliver of Russia Today”, Camp is the host of RT America’s first comedy news show Redacted Tonight, which tackles the news agenda with a healthy dose of humor and satire. Lee’s writing credits are vast, having written for The Onion, Comedy Central and Huffington Post, as well as the acclaimed essay collections Moment of Clarity and Neither Sophisticated Nor Intelligent. Lee’s stand-up comedy has also been featured on Comedy Central,  ABC’s Good Morning America, Showtime’s The Green Room with Paul Provenza, Al-Jazeera, BBC’s Newsnight, E!, MTV, and Spike TV.

This article was originally published by Truthdig.
The statements, views, and opinions expressed in this column are solely those of the author and do not necessarily represent those of RT.